Natural branches are the best perches you can offer your bird. But a lot of people get stuck at the part of getting that branch they found into the cage. Here are some solutions (without pictures yet...but they're coming):

If you are careful with your selection of branch you can often just jam the bugger in to good effect. The trick is to get a branch with a decent amount of slightly bendy twig stuff at the end and to cut the branch just a bit wider than the space you want to put it in. You put the main end of the branch in first, nestle it up again a cage strut or corner and then push and shove untill the rest of the branch goes in. Then you re-arrange the twiggy ends into several different spots, and keep doing it until you've found the right angles so that the branch just STAYS.

In the background of the image below you can vaguely see a 'twiggy end' arrangement. It's not the finest example of what I mean, but you can at least see that gravity isn't shifting that perch downwards without the main twig/branch resting in the corner having to undergo some serious breakage, and there's a decent size twig/branch at the bottom that goes through a hole in the wire to stop the perch from moving forwards or backwards. There were further points of contact but I can't find a photo that shows the whole thing. It's a shame because I still remember this branch fondly, despite it being few years ago. That's right, I have spaces in my brain reserved just for remembering awsome branches. 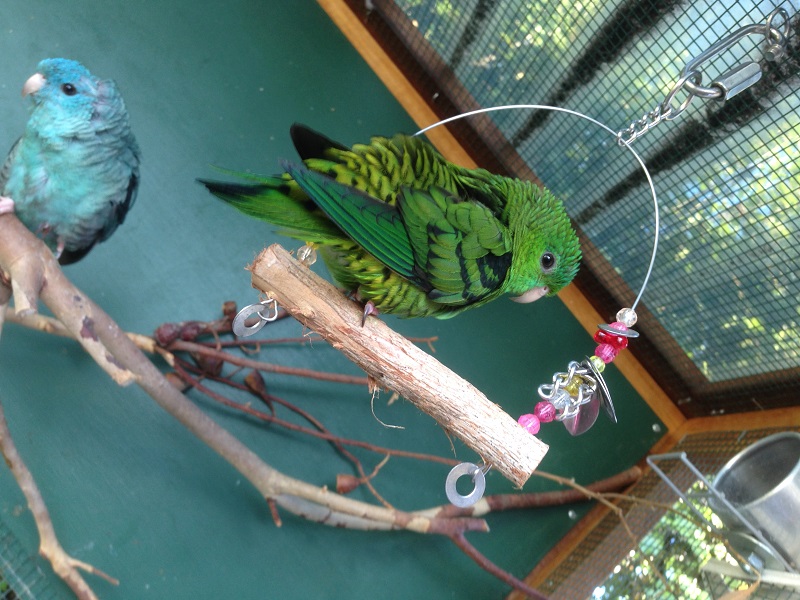 When placing a new branch into a cage I'll start with maximum twiggage and edit twigs as needed to get it in. After placement I'll remove any extras that I feel are just cluttering the space rather than adding to the layout, and often times a branch will start off super bushy, to be edited down gradually over a period of weeks as bits die off, get chewed or get pooed on.

You can also go the other way and shove the twiggy end in first, forcing the big end in and letting the rebound push it into a secure placment.

Believe it or not, but the branch below was manhandles into place. 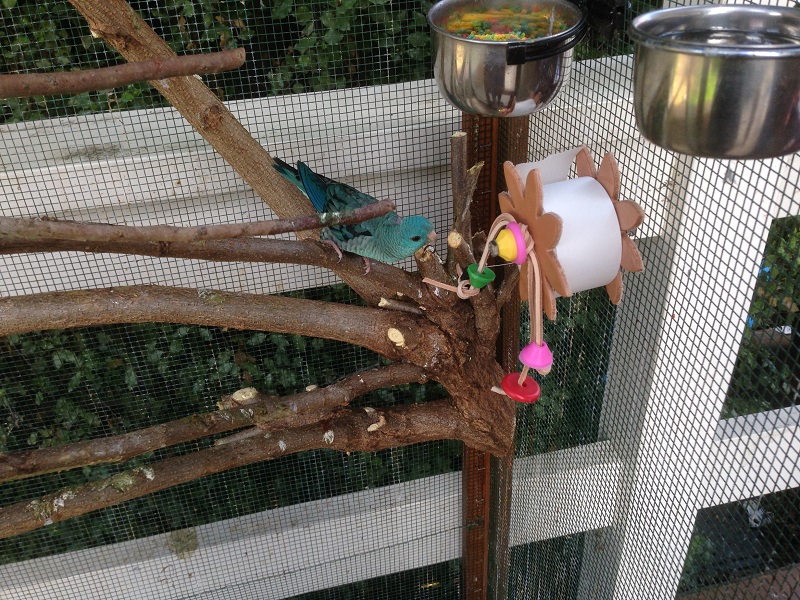 Warning 1) DON"T do this when your bird is in the cage. You'll scare it's little socks off.

Warning 2) Check the stability every few days. As the branch drys out it will shrink a bit (or your bird might do some pruning) and it's positioning may loosen up and need readjusting to avoid the whole thing falling down. In the image above force of personality kept the branch in place BUT I added screws and washers (covered in # 3) soon after placing the perch because, seriously, that monster falling could kill. It was probably about two weeks in when the branch had shrunk to the point that the screw started taking the weight.The other end (which I don't have a photo of) was secured at multiple points with twigs jammed through the wire in various places and larger branch ends pressed up again cage corners. I never needed to edit that end.

Negative aspects of the manhandling technique is that you don't often get the perch where you actually want it, but rather have to just put it where it works. It also takes a bit of practice. You also run the risk of bending bits of your cage out of shape with your forcefullness, not to mention poking yourself in the eye on a twig. Regardless, I have used this technique often and have been satisfied with the results more often than not. 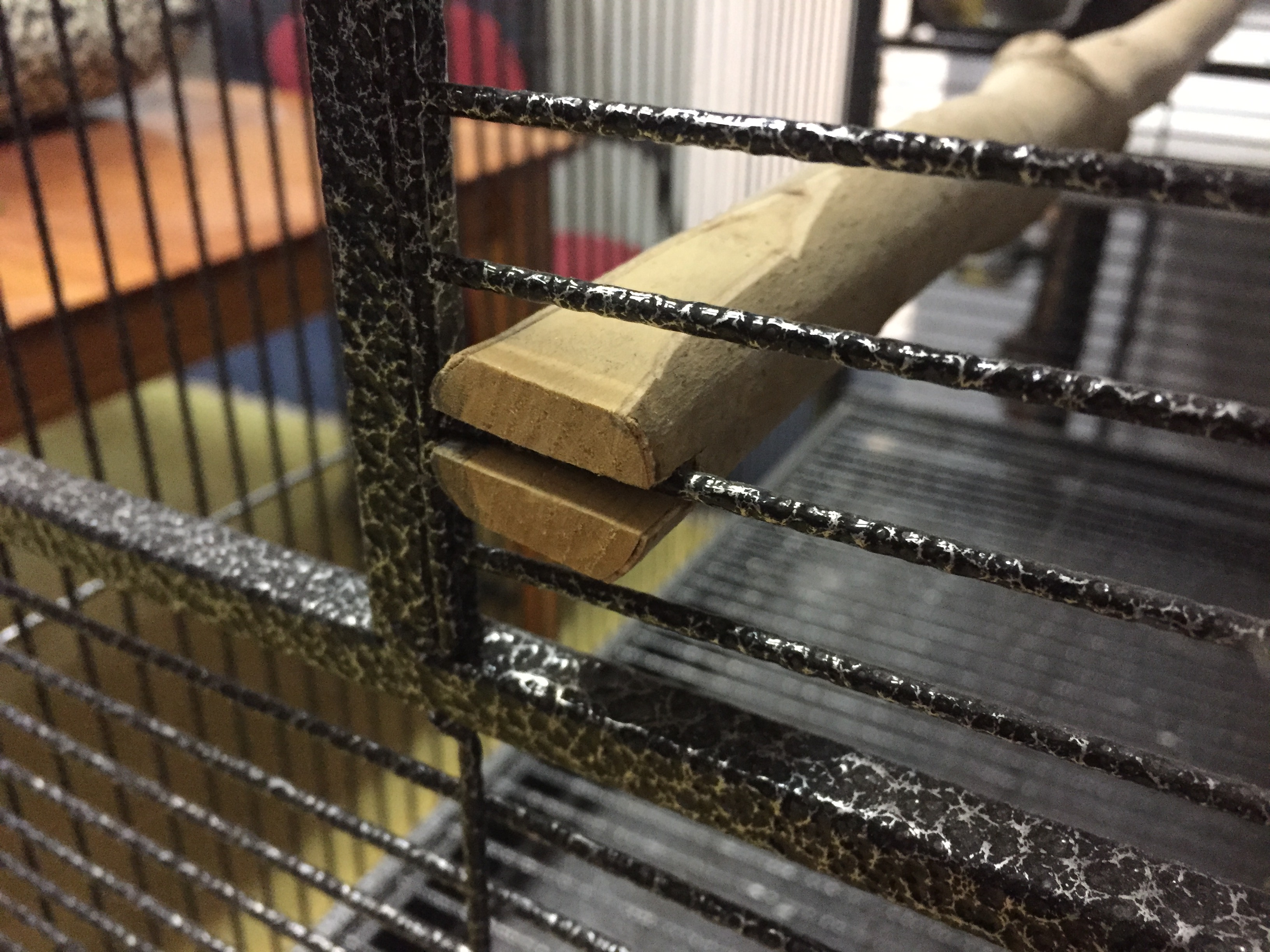 Choose your branch, measure and cut it so that it is about 2-4cm longer than the space you intend it to traverse. Use a saw to notch each end. These notches are meant to line up with the cage bars, so it is imperative (trust me on this) that you check the alignment first. Cut only one end and test it out. Put it in the cage with the notch nestled into its designated spot, then figure out where the other end is going to be. Now in this test phase you obviously can't have it going straight across yet, because it won't fit. You have to place it higher or lower than its intended spot (if you're working on a vertical bar, back or forth if you're aiming for a horizontal bar) so that you can then draw the mark for where your notch should be cut. Without this drawn line, you're bound to cut the notch at the wrong angle. That's certainly how it works out for me anyway!

Once you're sure you can cut the second notch, and with a bit of fiddling, get the perch in place.

Disadvantages to this method are plentiful in my opinion. But that could just be because this technique and me don't mesh. Getting the perch just the right length can be remarkably tricky, and often you have to make several extra cuts after the first cut to get it down to the right length so that it will fit. And you run the risk of cutting it too short on one of those refits, making the perch useless. And it's amazing how often your notchs don't line up with the bars despite the measuring. Finally, your perch can't be too fat, or you'll need more than one notch on each end to fit it against the bars. One notch is tricky to line up, but to line up two you need an engineering degree.

You can see why the man handling technique became my default.

This is definately one of my favourite options, and works well in conjunction with the manhandling technique. Measure your perch up. If you can employ a helper for the next part things will go swimmingly fast. I've frequently done this all by myself, even with big bastard branches to go in a macaw's aviary. It's much easier if you have someone to help though. 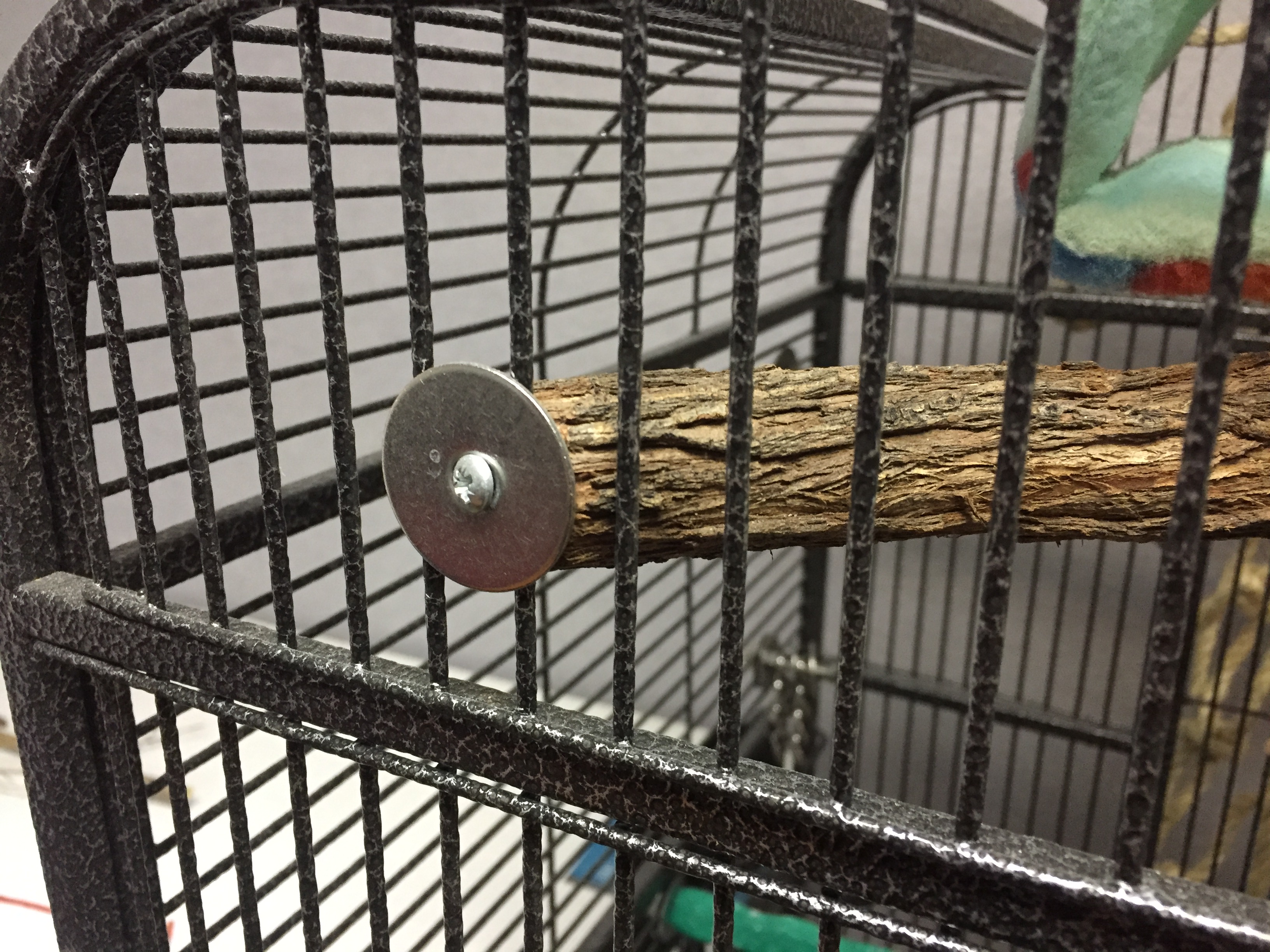 Drill a hole into one end of the perch. Place perch in the cage at the spot you want it. Get someone to hold it there while (from the outside of the cage) you hold a washer in place and then screw in a screw. Get the screw all the way in so that the cage bars are squeezed between the branch end and the washer. With one end attached, you can now attach the other end. Now you could have drilled the hole in the other end before placing in the cage, but I've often drilled the second hole after placing the perch. This is frequently because the other end is all twiggy, and I do a bit of manhandling to get it where I want it, and then pick the choicest branch to add my 'better safe than sorry' attachments to.

Now with small branches you don't need a lot of screw, and sometimes don't even need to bother with predrilling, but with bigger branches I recommend using a good 50mm long screw for a cage set up. If you're using a large washer for the attachment, you might need to add a small washer on top of it, so the screw head doesn't go all the way through the hole.

An advantage to this technique is you really can put the perch anywhere you want, because you will be securing it in place with a washer and screw. A disadvantage is that to move (or remove) the perch you need to get your tools out.

Choose your branch, drill a big hole through each end, and thread kabobs or chain through the holes and hang your perches. If you're using chain, you can use pliars to attach o-rings to the ends or, easiest of all, quick links. Really simple.

There's no problem using rope tied around the branch to suspend it either, but please try and avoid ropes that have been treated (favour plastic rope and smell it first - seriously you can smell if its been treated), as your bird WILL be chewing on it. On that note check the state of the rope and general set up of the suspension every day. You do not want it falling.

I only vaguely remember the branch shown suspended by rope below. It looks pretty dodgy if you ask me now, and I can only imagine that it was one of those times that I cut the perch too short and this was me making the best out of a screw up.  Despite how dodgy it looks, I know I would have been happy with the stability and religiously keeping my eye on the state of that rope. There are many bird's I wouldn't ever entertain this sort of set up with, as they might cut through the rope whilst I wasn't looking. The other end of the branch I believe had many prongs which were nestled through various holes in the aviary wire, and whilst it looks like the branch is free floating at this end, it's actually rested up against the wire, and the rope is deliberately spread out to reduce the possibility of the perch shimminging out of its hold. That's what I'm telling my self anyway. It really does look dodgy doesn't it! 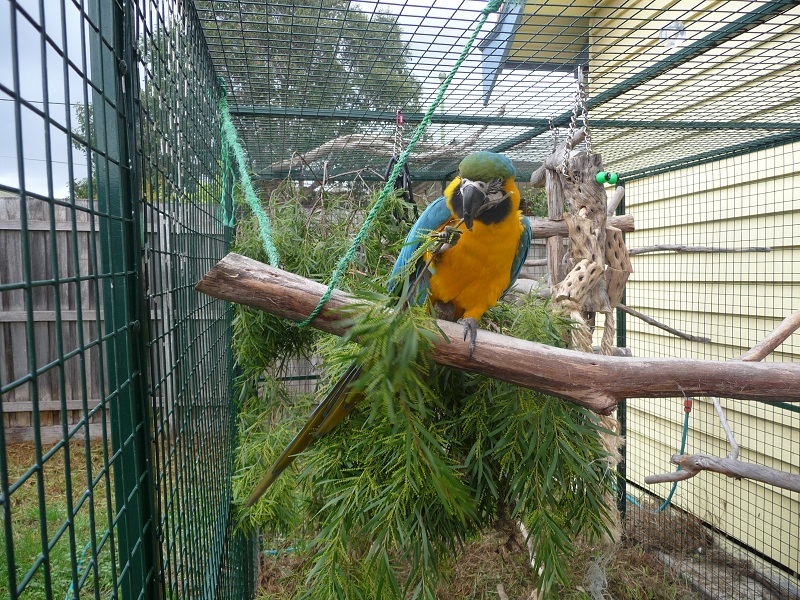 They won't span your cage, or come with foliage attatched, but they are super convenient! It's easy to rearrange the perches as well as to remove for cleaning. They often lend themselves to good interior layouts that encourages good use of the cage space by your parrot too.

So there you have it. An article all about putting branches in your bird's cage. If you want to learn more about why to use natural branches, or where to place them in a cage. Well, right now, you'll just have to wait for another blog post.

However I can point you to this blog post which covers the three essential tools you'll need in order to collect and put branches in a cage.